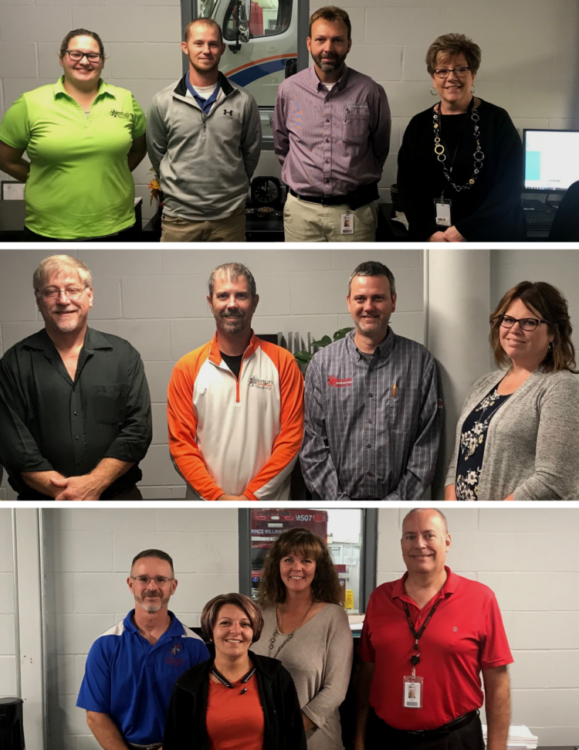 Braun Ambulances is pleased to welcome Tony Butler, Steve Richardson, and Gary Ford to the engineering and applications team. As part of this team, Tony, Steve, and Gary work with Braun dealers and customers to produce their 2D drawings for price-quoting and proposals. Each has previously worked for Braun and brings something different to their new positions.

Tony Butler joined the Braun family in October of 2006, working for various departments including the fabrication, maintenance, and engineering teams. Tony’s mother and father worked for Braun Industries for over 30 years each and were volunteer fire and EMS personnel, respectively. Tony’s sister has also worked as a volunteer fire and EMS provider, as well as a full-time EMT. With a family history so deep in the field, Tony understands the importance of building a safe and efficient ambulance. When asked what he enjoys most about his new position, Tony said “I like the freedom of helping a customer decide what will flow best for their new unit. [I also] like the customer interaction and showing them what we are capable of building.” In his spare time, Tony spends his time gaming, playing a variety of sports, and has an interest in cars and motorcycles.

Steve Richardson joined the Braun family in April 2018. Steve has an associate degree in mechanical drafting and engineering technology. Steve has a family history of EMS providers, including a sister, brother-in-law, and niece who have worked in the field of fire and EMS. In his spare time, Steve enjoys spending time outdoors and hunting.

Gary Ford has been with Braun Ambulances for nearly 37 years. Gary joined the Braun family in December of 1982, starting in the body shop. Gary worked as a volunteer EMT for six years, and his wife is a 911 dispatcher. Gary says that he enjoys “working with our dealers to find solutions/improvements to what the customer has requested,” as part of his new position. In his spare time, Gary enjoys woodworking, cycling on the many bike trails in his area, antiques, and anything hands-on.

Braun Ambulances has also expanded their pricing team with the addition of Connie Slagle, Mark Turnwald, and Penny Richardson. Connie, Mark, and Penny work to help quote ambulances, amongst other tasks. These individuals have each worked previously for Braun and bring their extensive knowledge of the company to their new positions.

Connie Slagle has worked for Braun Ambulances since 2000. Before working for Braun, Connie worked as Plant Manager for a company that produced seats, line set, and interior chassis panels for Navistar International stateside and Canada divisions. Connie’s son-in-law works as a full-time firefighter/EMS provider, so she knows how important it is for customers to get ambulances that are safe. In her new position, Connie enjoys experience new challenges. In her free time, Connie enjoys cooking, hiking, reading, and volunteer work.

Mark Turnwald has worked for Braun since 2013. Previously, Mark worked at Derry Drugs for 25 years. With an associate degree in accounting, Mark was a great fit for this position. Mark says he enjoys working with his co-workers and enjoys that there is something different almost every day in his new position. In his spare time, Mark enjoys swimming and yardwork, as well as cheering for the Cincinnati Reds and Bengals and The Ohio State Buckeyes.

Penny Richardson has been with Braun since 2007, working in the ambulance industry and retail previously. Penny has an associate degree in accounting, giving her the knowledge needed to excel in her new position. Penny’s husband was a firefighter for over 20 years and currently works as a first responder. In her spare time, Penny enjoys repurposing items, crafting, volunteering, and spending time with her family.

The ambulance manufacturer has also expanded their order review team with the addition of Michelle Tate, Stepheni Hoehn, and Travis Parsons. These individuals work to review new orders and discuss any open issues with dealers and customers.

Michelle Tate has been with Braun since January 2015. Michelle was raised in a family deeply involved with the Ohio City Fire Department, instilling a passion for the fire and EMS industry in her. Her grandfather worked as Chief of the department for 35 years and her father worked as assistant chief for many years as well. Michelle grew up around the department, which used Braun ambulances, allowing her to learn about the company and the apparatus. Throughout her time with Braun, Michelle has worked in various positions, including as an electrical analyst and material scheduler. In her spare time, Michelle enjoys spending time with her 2-year old son, Pierce, and her husband Teddy, who also works at Braun. She also enjoys spending time with her friends and other family members.

Stepheni Hoehn has been with Braun Ambulances since February of 2018. Stepheni joined the Braun family to become part of a bigger team that produces something amazing. Prior to her position at Braun, Stepheni worked in production in PSI and as a supervisor with another company. When asked what she likes most about her job at Braun, Stepheni said “[We’re] one big family here. Everyone works together and helps each other out when needed.” In her spare time, Stepheni enjoys spending quality time with her family and going camping.

Travis Parsons has been with Braun for over 14 years. Travis joined the Braun family because he knew the quality of the product being built and the family atmosphere of the company. Travis says his favorite part of his job is “The chance to work [hand in hand] with our dealers and customers in the process of building their new units.” Travis works as the assistant fire chief for his local fire department, giving him the insight needed in producing efficient ambulances. In his spare time, Travis enjoys spending time with his children, coaching, being involved with volunteer work for his kids’ schools, volunteering for his fire and EMS department, and playing music with his band.

Braun Ambulances has been fortunate to find so many wonderful employees over the years, and the additions to our ambulance sales team are a testament to that. “[These individuals] have immersed themselves in our family-focused company culture and they take pride in the products we build,” says Chad Brown, Vice President of Sales and Marketing at Braun Ambulances. “We look forward to watching Connie, Tony, Penny, Travis, Gary, Steve, Mark, Michelle, and Stepheni flourish in these unique roles.” This newly expanded ambulance sales team will positively impact the Braun team, the dealer network, and the end customer.

For questions regarding the sales team expansion, please contact Chad Brown at chadb@braunambulances.com.

Demers Ambulances, Braun Industries, and Crestline Coach Ltd are three distinct brands owned by Demers-Braun. The second largest ambulance manufacturing organization in North America, Demers-Braun has been recognized for leadership in innovative design and quality products. With over a 140-years of combined history serving the emergency response market worldwide, Demers Ambulances, Braun Industries and Crestline Coach Ltd offer a wide-range of ambulances, specialty vehicles, and small to mid-sized buses. To learn more about the respective brands, visit their websites at www.Demers-Ambulances.com, www.BraunAmbulances.com, and www.CrestlineCoach.com.

A proud partner brand of:

GET IN TOUCH WITH US